Polytomic requires a read-only Snowflake account with access to all the tables and schemas you want to query. Though not required, we recommend you create a dedicated Snowflake user for Polytomic. There are instructions on how to do so below. 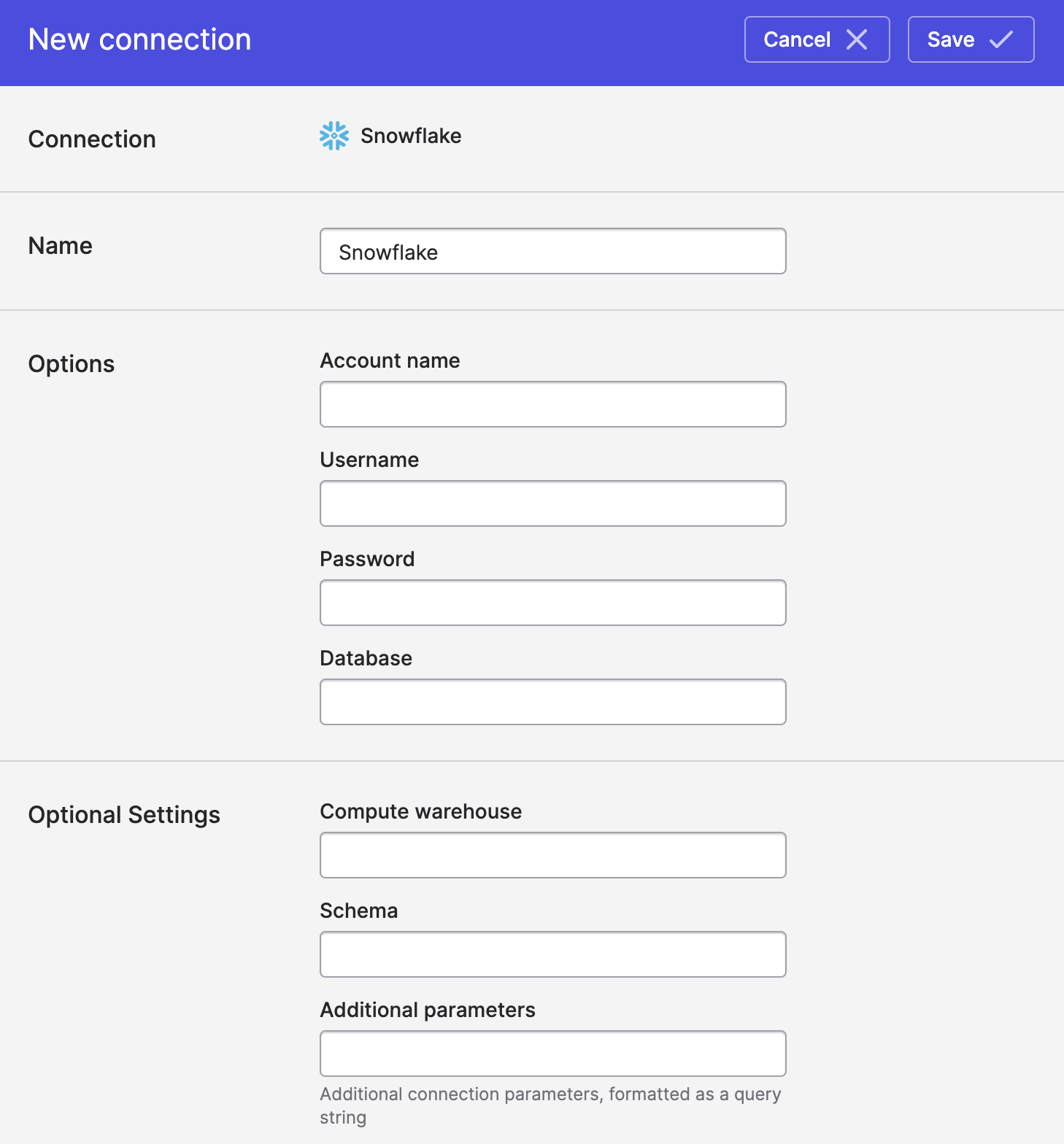 If you unable to save the connection, you can try and determine which part of your configuration is wrong by logging into Snowflake and looking for the database, schema, and compute warehouse.

To sign into snowflake take your account id and create a URL that looks like this: https://<accountid>.snowflakecomputing.com/console/login. You can login using the username and password you supplied above. If login fails, or if you cannot find the database, schema, or compute warehouse after logging in, then you will need to resolve those specific access issues.

Polytomic can also write to tables in Snowflake. Here are the requirements for that:

You should be able to create a new table using the Create new table... target for Snowflake. A new table will be created after you save the sync for the first time.

If you want to change the schema, either modify the schema by hand and reflect the updates in Polytomic, or get Polytomic to create another new table.

Before saving the sync, you will input a table name, to be used when creating the new table. The new columns will be named and typed based on the source column names.

Polytomic creates new columns in Snowflake with the largest types available to ensure the data will fit. For each selected field, Polytomic will create a table with the following column types:

Suppose we want to create a new table that contains user IDs, organization IDs, the user's name, and the user's last login time. 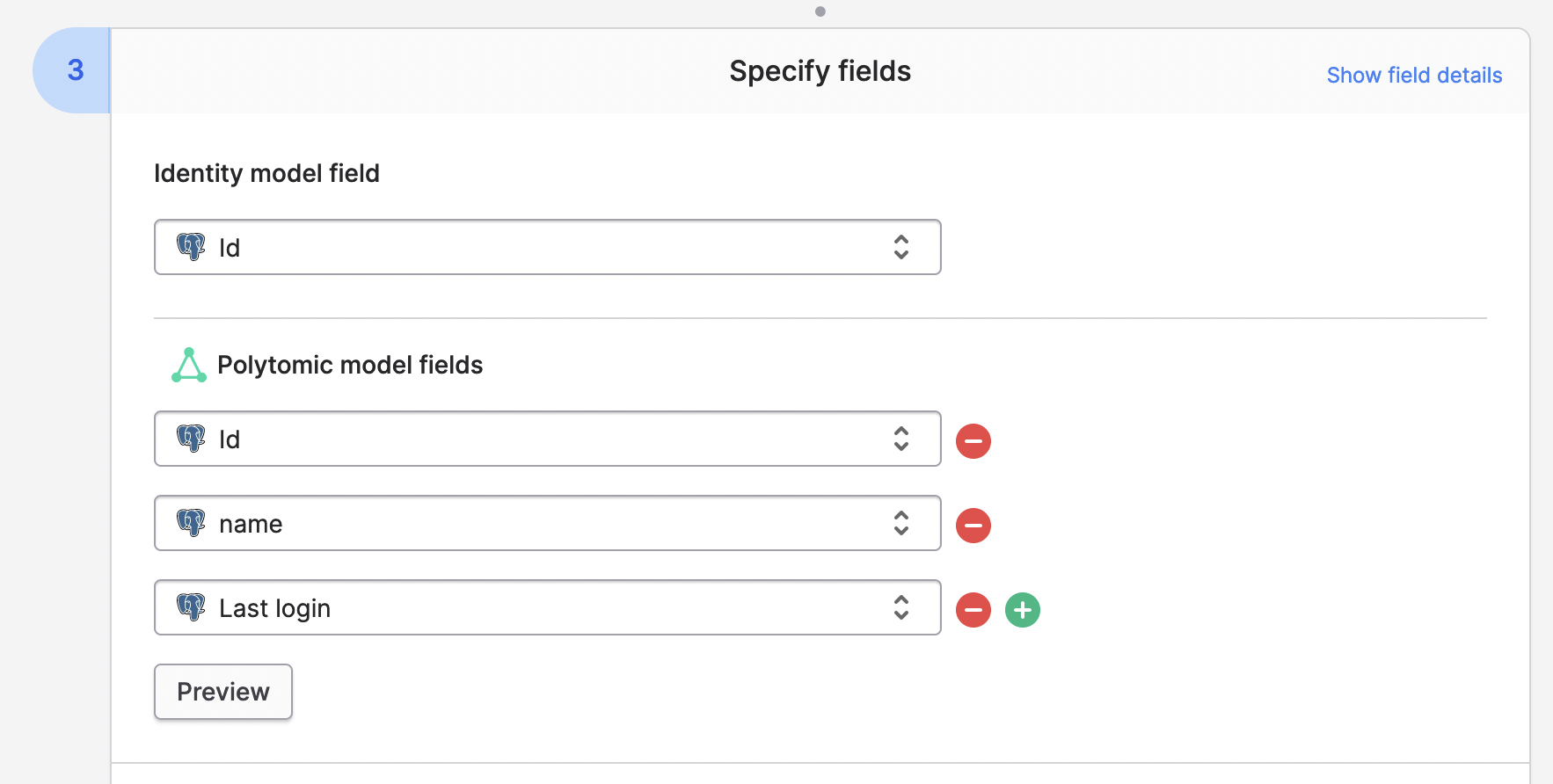 When you attempt to create the table, Polytomic will execute the following:

Permission requirements for Polytomic may change based on whether you use it as a source or as a destination. At the minimum, it is recommended that Polytomic is given its own User and Role. Optionally you may set up Polytomic its own database and warehouse; these are particularly recommended if you plan on using Polytomic to sync data into Snowflake.

The sections below should be followed in-order for new warehouse setup, or can be cherrypicked if you already have some setup complete. You may change any of the resource names, but be sure to update the resource names in subsequent commands.

Setting up a role

It is a good idea to give Polytomic its own role so you can give the Polytomic user its own set of permissions. You can create a suitable role as follows.

We will grant permissions to this role and assign it to the Polytomic user. We assign the role to SYSADMIN to give regular Snowflake Admins access to its objects. You may wish to grant PUBLIC if you want everyone to access the tables.

You can use the GRANT ROLE syntax as above if there is another role that is suitable for Polytomic to reuse. If you wish to grant Polytomic permission individually, you must do so on the database, schema, and table level. For example:

Polytomic should have its own schema in a database if you are using Snowflake as a destination. It is recommended that simply grant CREATE SCHEMA on the database so that Polytomic can create its own schema (which will be called POLYTOMIC) and have ownership of its own tables. Your users may also want to create new schemas from Polytomic.

Setting up a Warehouse

Though not required, a dedicated warehouse is recommended for Polytomic, especially if you plan on loading data into your warehouse or have large datasets that Polytomic will query. This will ensure your jobs execute without load issues.

Setting up a user

This is the user that Polytomic will access your warehouse with. Please customize the password in the snippet below.

You may create a database if you want the data Polytomic writes to your Snowflake instance to live in its own database, though this will restrict Polytomic's ability to see data in your other databases.

Tables do not show up in Polytomic (Model picker, Destination picker, SQL Runner)

The role the Polytomic user is using needs to have the following permissions: